When we look at how introspection produces internal awareness it causes the individual to become much more aware of the sheer power of their thoughts and just how damaging and painful it can be when one does not pay very close attention to their thoughts. One of the biggest things holding back the evolution of humanity is simply a lack of awareness a severe lack of knowledge of self you ask a random person what exactly are you? What is a human being? .
They will not be able to answer that question they do not know the answer but just like you said Steve a simple joining of the dots is all it takes if people simply look at the world they will understand that they are indeed a part of all there is they are a plugged into society, society is living their life for them on their behalf they are not actively doing anything to make the world a better place.
Just like when we look at a train for instance it’s a very attractive thing it’s an enjoyable experience the view is incredible most people would rather get on a train than walk to their destination. It’s literally the exact same thing with life and our society it’s very entrancing it’s very attractive but at the same time if one is not careful it’s extremely easy to simply become swept away and completely forget about the world at large forget about the well being of humanity at large and future generations of humanity.

One must ask themself if I were to return to this world what sort situation would I want to find myself in the golden rule of “treat others the way you want to be treated” of everybody abided by this rule there would be no problems in the world just like you said we are living in a struggling apelike society because our attunement is almost at zero.

Thanks for sharing!  I’ll think about this……The destabilising ruinous  spoiling, of  endemic deception, our way of life, makes people hide from each other and be very guarded. It takes much effort to do that. So we have less time to think. But I am mindful that deception is a natural way of life for all lifeforms. Camouflaged animals, sea creatures- animals that look like plants, plants that look like animals.  I dont think we can ever be here and have no problems. We come here to be crucified. We must have obstacles to overcome. Great authors have said humans don’t really want utopia. If we were given it, many would just wreck it.  Rejecting it.  We went to the moon because it was hard. We climb mountains for the same reason.

Some animal societies like ants termites and bees are all genetically twin brothers  born from the same queen, so guess what ! They agree on nearly everything and almost nobody would ever step out of line That would seem Utopian. Human society with sexual reproduction has millions of  random personality combinations that are all trying to live together in one society. And we are nowhere near as content as those simple hive animals. So we are a stupendously large planet wide experiment with many dozens of personality types trying to coexist. If you just look at just 2 personality types introverts and extroverts.  We find Introverts don’t get promoted in companies. Because they cant  stand in front of a group and talk to them. Extroverts happily look for such situations. So straight away we get stratification in society. Groups and classes forming. Animosities. Deceptions. It forces us to treat each other differently. So the golden rule gets diluted by practical necessities forced upon us. Animals are also introvert and extrovert also. So we get that from animals too.

Acknowledgement of our behavioural deficiencies due to animal ancestry and the myriad bad permutations due to the sexual reproductive gamble can be seen in that Ancient Monotheism video where Gnosis is clearly described, where the savages are told, personally, mentored, to observe the 10 commandments. not stealing, don’t kidnap women, etc They need gnostic mentoring because they have animal passions.

You see gender has only been around 300 million years in plants and animals. Before that everything was female. Much safer but a lot less genetic permutations. The switch to sexual random combination of genes is an exciting but risky throw of the dice.Seriously raising the stakes to wild card status.

So Adam, YOU started out as female, we all do. So many days after conception a hormone switch was thrown and you were transformed into a boy. That process produces a lot of mistakes and installs in men more illnesses, more criminality, more risk taking, and much more combativeness. These things are often good. But they result in shorter lifespans and more suicides, more depression. And the many hormone mixes produced make domestic violence and murder and crime genetic.

A few men batter women and end up in jail When asked how they feel while doing this the answer is ” Ten foot tall and bullet proof” A huge surge of power as if they are superman. Its a totally genetic hormone reaction. You cannot calmly explain to this man the Golden rule. Its beyond his comprehension, because his animal passion is so dominant. You are likely to be smashed in the face for challenging his behaviour. He truly believes he can’t help himself lashing out at others. Unable to keep his hands in his pockets. This is his natural behaviour. And likely he was bashed in his childhood. And its really all about power.

Me personally I don’t care about power over others at all. I am also totally uncompetitive and it’s never occurred to me to compare myself with anyone else. Which I am told is unusual behaviour. Most people are competitive to varying degrees.

However, many millions of people are obsessed with power and control of others. In the US 49pc of people, descended from British Mayflower Puritans are so angry they feel they deserve to rule everybody else. Anger at perceived inequality ( why wasn’t I born with a Rolls Royce, it must have been stolen from me) those rich bastards are responsible for my personal grief. And if only angry people could control the Whitehouse, sack / defund all the police, empty all the jails, jail all the rich bastards, we would all get our Rolls Royces back ! And that would be Utopia. People who think this way are clearly not rational and cant be reasoned with. These Democrats (Labour party) actively invert the Golden Rule and apply the law selectively to punish people they don’t like. The lefty cancel culture

Whereas Republicans (conservatives) see value in the golden rule because to them its a law- and try to ensure everyone is equal before the law. Everyone is treated the same. But only In theory. Rule of Law determines the quality of a civilisation. Romans succeeded because of business law. You had to repay your debts. Or debtors could literally carve off any part of your body they wanted. So debt delinquency was low. It enables a sophisticated economy and business requires record keeping and literacy, writing for contracts, they must be archived. Education is required. Debtor punishment seems harsh but their values were different in those days. Today their language Latin is the holy language, the basis of most European languages, the rule of Law, is revered. Certainly in the public’s eyes. But not the elites.

I think your Golden Rule question is due to that fact you are still a blank slate with not much life experience yet. But you are certainly getting there. Experience getting to ages 25 and 30 will greatly enrich your understanding of why so many people are good but a minority of less than perfect people only pay lip service to the Golden Rule and invent many harmful exceptions. And you could read Hoffmans Judaism Discovered to learn how the Golden Rule is inverted and a whole religion is built around that.

Ancient Gnostic natives relate how they are mentored internally by source, to control their animal impulses, in this very entertaining but serious video below .

And see here, in the comments column, snapshot below, how these ardent religion junkies fawn over this video and ignore my 5 month old entry. Not one person in 5 months is curious enough to ask What are you talking about ? I have repeated the entry 5 months later in Bold Type but it will still be ignored. So don’t hold your breath waiting for religious people to get the message These entries are top of the column 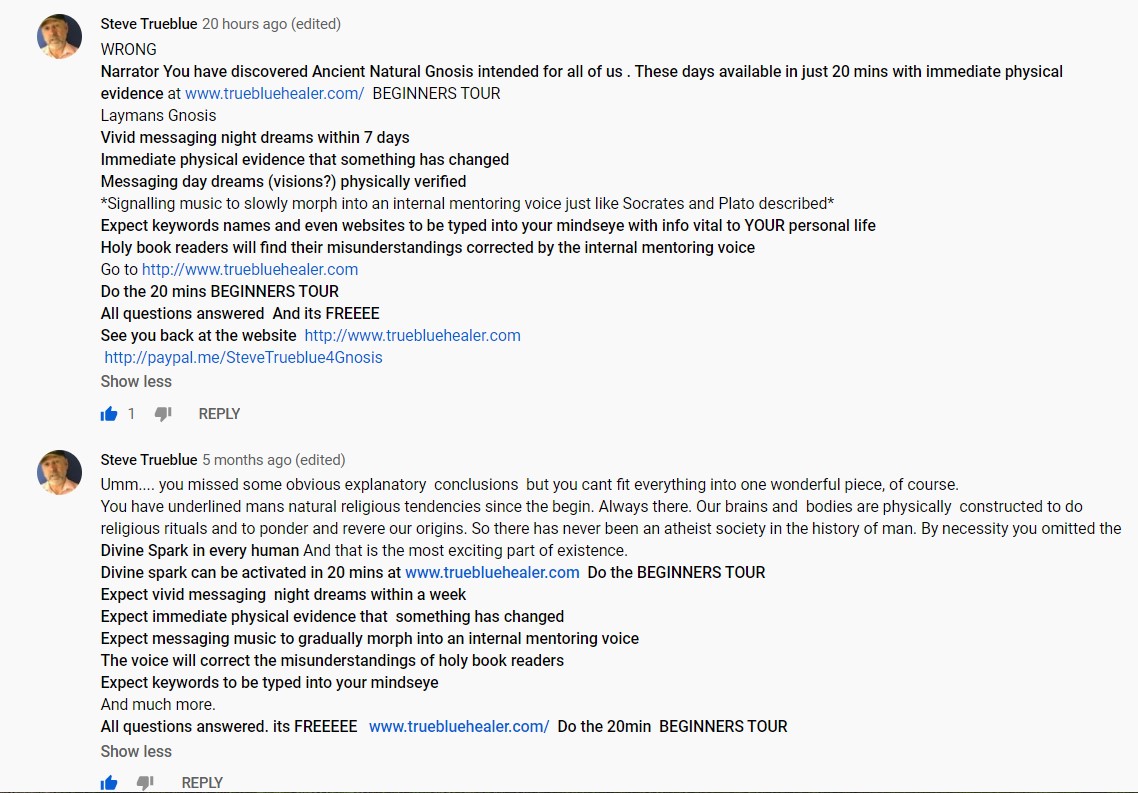